Mark comes to First Congregational after serving thirteen years in parish ministry both as pastor at Old South United Church of Christ in Kirtland, Ohio, and as the Associate Pastor at Rock Spring Congregational UCC in Arlington, Virginia.

Initially ordained in the Roman Catholic tradition, Mark joined the United Church of Christ in 1993 and began his ministry in the UCC in 1997 when he was called to serve as Minister for Congregational Stewardship for the Stewardship Council at the UCC National Offices in Cleveland, Ohio. While working at the UCC national office, Mark worked extensively with UCC congregations throughout the country in giving, vitality, and mission interpretation and support.

He and his husband Matthew married at Pilgrim Congregational UCC in Cleveland in 1997 and raised Mark's nephew Jeremy together. Mark enjoys photography, reading, and the occasional bike ride! 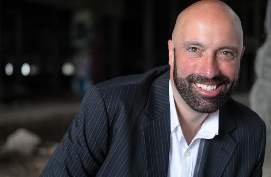 Originally from Rochester, New York, Jeff has a strong connection and tie to Western New York State. Now located in the New York City area, Jeff is embracing opportunities as a singer and songwriter and branching out into the world of composing music for movies and television.

Jeff's musical capabilities are diverse and advanced. He is a trained vocalist experienced in musical theater, opera, oratorio, and choral singing; a pianist with very strong sight-reading and improvisational skills, both as a soloist and accompanist; a collaborative conductor of school and church choirs, as well as musical theater productions; and a composer of solo vocal, choral, orchestral, piano and musical theater pieces. An example of the latter is a two-act musical he composed entitled “Immortally Yours,” produced in a workshop in Rochester, New York.

Jeff is a self-motivated, driven, and passionate individual. Although his college degree program at Roberts Wesleyan College in Rochester, New York, focused on vocal music education for over twenty years, Jeff has immersed himself in the musical theater world as a performer and director. This has developed his versatility, giving him background and expertise in making quality productions, including working successfully with people of all ages and dispositions.

You can see examples of Jeff's work on his website: http://jeffwilson.bandzoogle.com/bio
From there, you can purchase his 2007 recording called "Progressions," which features original music performed by Jeff.

Julie Luce has a varied musical background. She has sung in the First Congregational Church since she was in the Junior Choir. She now sings in a local community choir, the Lakeside Choraliers. She plays the flute and also studied violin for ten years. She dabbles with the guitar and the piano.

She directed variety shows for Park Ridge High School, where she was a full-time teacher of French and German. Julie played handbells in a junior handbell choir at First Congregational and has been playing with the Valley Ringers for some time now. She is happy to be directing a wonderful group of enthusiastic bell ringers.

Recommend this page on: